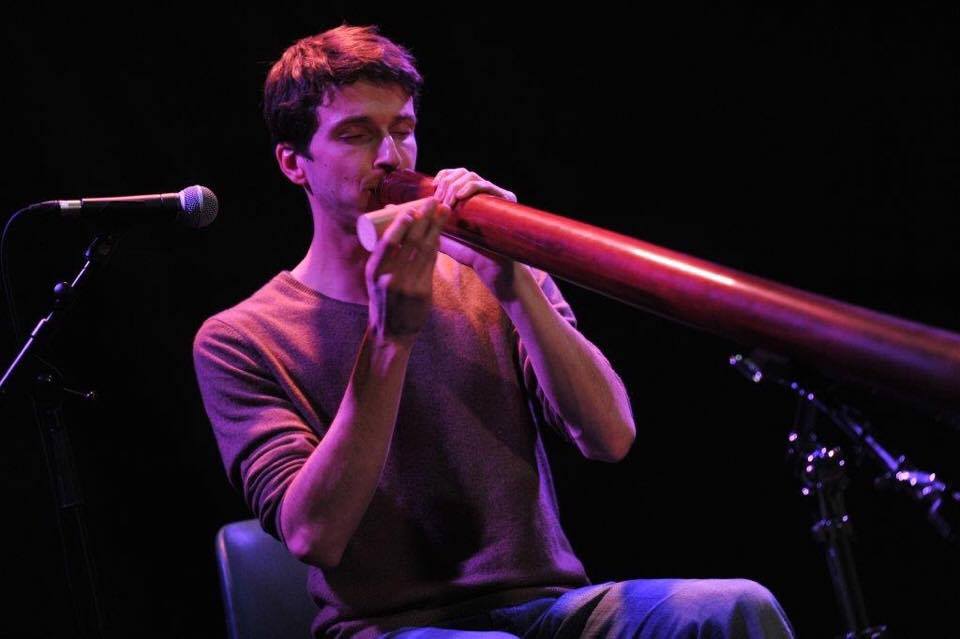 How long have you been playing Didg?
I’m playing the didg since the end of 2001, the beginning was very intense, I took 2 years break as I was exhausted back then. This might have been my best decision – ever since I am playing non stop and I gain a lot of pleasure playing and teaching.

What do you feel when you play the didg?
Wooh – that’s a big one, I can’t give you an exact answer, it changes rapidly – like life: Sometimes it a total relaxation, sometimes there’s anger or tension. The moments I love mostly are when I can totally forget myself and just let the didg play by himself – these moments feels like being on another dimension.

Where was the first time you meet a Didg?
Well – that’s a simple story, My twin brother came back from a gig he saw in Dijon (The city I was born in France) and in this concert there was a didgeridoo playing with the band, my brother bought a CD and gave it to me, saying: “I think you will like the Didgeridoo” – I guess he was totally right! 🙂

What was your first Didg?
My first Didgeridoo was a Teck didgeridoo – a very bad one unfortunately, but back at that point I couldn’t tell the difference. I used to take it to a Didgeridoo club in Dijon but nobody wanted to play with me.. I really couldn’t understand why… for me it was great! After a few weeks with the same reactions to my didg I understood it was quite crappy, then 6 months later I bought my first eucalyptus Didg – this was a hugh uplift for me and for my playing level.

Who was your strongest DIdgeridoo playing influence?
I can’t mention only one name – at the beginning I was hooked on Ash Dargan and his album, “Dust, Ash and Dirt” I loved his style and was deeply influenced by his dynamics and precision. Later on I discovered Denra Durr who was for me and still is the most enjoyable player to listen to, his album “Lezard Mystry” is just perfect. I would also like to mention Stefan Kent and Alan Dargin who had a big influence on my playing, there are more of course but I can’t mention them all here 🙂

Are you playing mostly with bands or as a solo performer?
Usually I play solo, I used to play with a big band of 80 musicians, and took part in many different projects. Lately I met a few talented musicians in Paris – a pianist, a percussionist and flutist – we are trying to create something new and I truly hope we will make good music together.

Tell us a bit about you new website (https://gauthieraube.com) – what have you decided to create a new professional site ?
I had my old website since 2009, but I felt I wanted something I can share more knowledge, therefore I created my new website with my blog in it, the aim is to share as much knowhow and techniques – especially recurring questions I hear on my workshops.

What are you plans for your personal activity?
My plan is to keep publishing articles and soon to have an english version of it all. I would also like to continue and play with other musicians, and my most important goal is to share the Didgeridoo as many people I can who know nothing about it – I like the fresh minds of people who just started playing and are truly open to learn.

What was the most powerful experience you had with Didgeridoos?
Now that’s a tough question to answer – there were so many beautiful moments, I guess I can mention my last tour in Russia, where I spent lately two great weeks, the russian crowd welcomed me in an extraordinary way and I would like to thank them again for it – that was a very special experience for me – thank you guys!!

Do you travel a lot with a didgeridoo?
Yes, and I feel very lucky and appreciative for that. Since I first began playing I was invited to many places, such as: Australia, Germany, England, Switzerland, Belgium, Netherlands, Italy, Spain, Portugal, Hungary, Croatia and Russia… Looking forward to see where will be my next visits, good chance for Poland next year!

How do you see the future of DIdgeridoo in the world?
Wooh, another big one, if your refering to the professional side, I believe more bands with Didgeridoos will appear due to the fact that technic levels are rising rapidly in the last 10 years.
If you are referring to the didgeridoo community, basicly I believe that our community can grow and make more connection between different countries. Internet and social media’s are a great bridge – but, we have to stay open minded to the rest of the world to make sure it is not something that comes in waves and then disappears again (like it happened in Germany in the late 90’s and in France in 2010) – our responsibility is to spread the didgeridoo “news” to everyone now.

Do you have any major tip or advice for new players?
Keep your mind open – at the beginning when you know nothing “your glass” is empty and you can fill it easily, when It starts to be half full, we say “Yes, I know this.. I know that…” that’s the exact moment when learning is stopped. Keep in mind that you know nothing (I still do myself) and you’ll have a continues progress. Another important tip is to be focused on sound quality – so many players forget about that.

Do you have any concerts or workshop coming soon?
My 2016 season just ended, I will start booking new gigs for 2017 soon, so people – if you want me to come to teach and play in your countries – let me know soon! Thank you!

The YD team would like to thank Gauthier for the interview and wish him good luck!
Hope you can see him play live or attend one if his workshops in the near future!

This site uses Akismet to reduce spam. Learn how your comment data is processed.